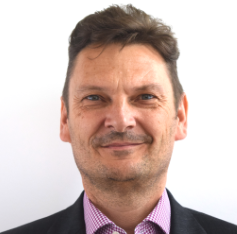 Paul Hoskins studied French, German and Music at Cambridge University, and conducting at the Royal College of Music with Norman del Mar and Christopher Adey. Since 2018 he has been Director of Music at the Purcell School, where he is responsible for the artistic programme; and with the help of over seventy exceptional instrumental and academic teachers, he oversees the musical education of nearly 200 talented students, aged 10-18, from all over the world.

Until 2018, he was Music Director of Rambert, a dance company that played an increasingly important role in the music world. In 2009 he devised the Rambert Music Fellowship, an innovative scheme that nurtured the careers of young composers and choreographers. Other significant Rambert projects included Life is a Dream, set to symphonic works by Lutoslawski, at the 2018 Bergen International Festival; a choreographed production of Haydn’s Creation at Sadler’s Wells with the BBC Singers that can still be viewed online; Mahler and Dance at the Edinburgh International Festival, with Jane Irwin and Gerard Finley; and CDs of contemporary music for NMC Records. Paul has been responsible for dozens of commissions and world premieres, to regular acclaim in the national press.

As a guest conductor, Paul has worked with many of the world’s major ballet companies, including San Francisco Ballet, New York City Ballet, the Royal Ballet at Covent Garden, and many national ballet companies in Europe. He has conducted concerts with many of the symphony orchestras in the UK, Europe and America; Don Giovanni with Roderick Williams, The Magic Flute, the world premiere of Stephen McNeff’s Clockwork at the Royal Opera House, and rarely performed classical operas at the Buxton Festival. He has assisted at Glyndebourne and English National Opera, working closely with Mark Wigglesworth.

As a teacher Paul has helped a number of young conductors, players and composers. He has worked as a mentor for young musicians with the charity Future Talent, as an adjudicator at many schools and music festivals, and he is regularly invited to speak and write about music and dance. He has worked with several youth orchestras and choirs, including recent concerts with the London Schools Symphony Orchestra and the Purcell School Orchestra at the Barbican, the Watford Colosseum and the Queen Elizabeth Hall.