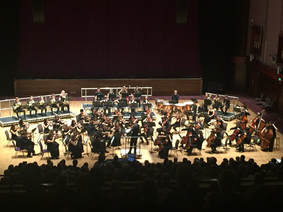 ​The Purcell School Symphony Orchestra gave a concert to our biggest audience to date at the Watford Colosseum on Monday 16th October under the baton of Graham Ross. The orchestra opened the concert with Rossini’s sparkling, light-hearted Overture to The Thieving Magpie, followed by Schumann’s Cello Concerto, considered to be one of the greatest Romantic concertos for the instrument, and after the interval we were treated to Tchaikovsky’s most-loved large scale work, his 5th Symphony. This concert was the culmination of weekly rehearsals since the start of the Autumn Term and an intensive three-day orchestral course with Graham Ross.

Cello soloist, Sebastian Kozub studies the cello with Pal Banda at The Purcell School. He has enjoyed success in competition at national and international level.  A couple of his other concerto appearances in 2017 have been with the Amadeus Chamber Orchestra and the Boston Symphony Orchestra.

The Telegraph said of Graham Ross, ‘To say he’s impressive would be an understatement’. Director of Music at Clare College, Cambridge, Graham made his conducting debuts in 2016/17 with, among others,  the Orchestra of the Age of Enlightenment, London Mozart Players, Malaysian Philharmonic Orchestra and BBC Singers, as well as acting as Assistant Conductor to Vladimir Jurowski.

This local venue is known for its acoustics. The Watford Colosseum has been used to record the soundtracks of Lord of the Rings, The Sound of Music and Star Wars. In 1995, Pavarotti came to Watford Colosseum to record Verdi’s Inno delle Nazioni with the Philharmonia Chorus. More recently, recordings from BBC Concert Orchestra have taken place in the auditorium.
In this section
Music Departments