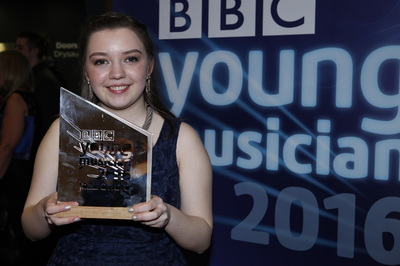 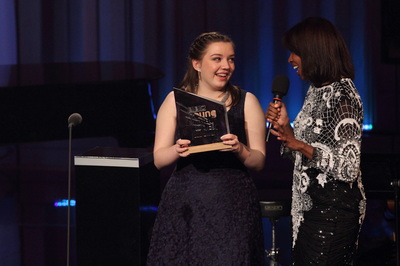 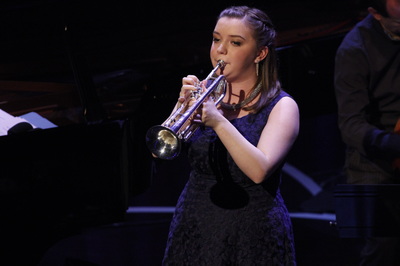 Following an extensive audition process, the final of the BBC Young Musician Jazz Award took place on Saturday 12 March at the Royal Welsh College of Music and Drama, Cardiff.  The five finalists included two pianists, one trumpeter, one saxophonist and one musician on saxophone and recorder, aged between 15 and 21 years old. They performed alongside the Gwilym Simcock Trio and were judged by Tim Garland, Gwyneth Herbert, Zoe Rahman, Byron Wallen and the Chair of the Jury, Julian Joseph.

Julian Joseph commented “We were enchanted by Alexandra’s presence as a musician, her sound, but I think most importantly there was a relationship with the blues and swinging that sounds important in her playing”

Commenting on her win, Alexandra said: “The whole thing has been an amazing opportunity! I can’t believe I even got this far. I wasn’t expecting to win but now that I have, it’s incredible, and playing with the trio was the best bit, they are just so good!”

Alexandra joined The Purcell School in 2015 and studies both Jazz and Classical trumpet with Steve Waterman and Tony Cross respectively, she also studies jazz piano and voice.  Alex is supported by the Government Music and Dance Scheme, the SD Whitehead Trust, The Junior Academy and Awards for Young Musicians.  She is a member of the Junior Jazz Department at The Royal Academy of Music and the National Youth Jazz Collective.  She was recently selected as one of two UK 16-19 year-olds to attend the Brubeck Institute Summer Jazz Colony in Stockton, California.

The BBC Young Musician Jazz Final will be broadcast on BBC Four on Friday 13 May, presented by Josie D’Arby and Joe Stilgoe.  BBC Radio 3 will broadcast a special programme dedicated to the Jazz Award on Saturday 26 March.

Gwilym Simcock said: “I’m so pleased for Alexandra. She played wonderfully tonight and communicated in a really heartfelt, genuine and unaffected way. It was very honest music-making and I think that’s what she communicated to the judges. Myself, James and Yuri have had a great time over the last few days working with her, she’s such a pleasure to work with and she’s very self-effacing.  I’m so pleased for her that she’s won this special achievement on what was a very competitive evening, not in spirit, but in terms of the quality of the music-making from all of the five finalists.  So I am absolutely thrilled for her and I hope this is the start of big things for her.”

The BBC Young Musician Jazz Award was launched in 2014 and runs alongside the established classical music format, which has been running since 1978.