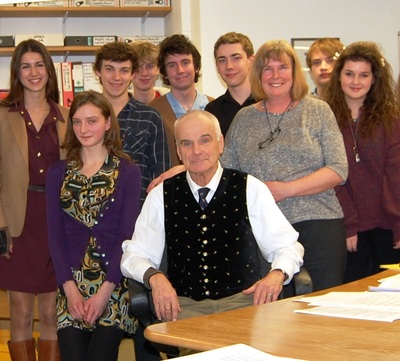 Sir Peter Maxwell Davies with our composers and Alison Cox, in 2013 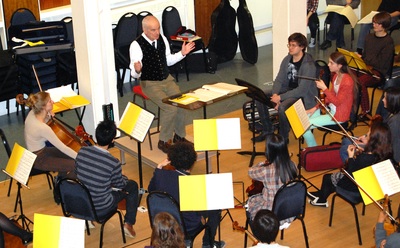 Sir Peter Maxwell Davies, former Master of the Queen’s Music, has died today, aged 81.  One of the foremost composers of our time, Maxwell Davies made a significant contribution to musical history through his wide-ranging and prolific output.Alison Cox OBE, Head of Composition at Purcell, said “Sir Peter, known as Max to those who knew him well, was a great supporter of the Purcell School’s Composition Department, and came regularly to give the first-study composers some wonderful seminars in former years. He also wrote a beautiful piece for the Purcell School Symphony Orchestra which we have played twice.  Edward Longstaff’s Contemporary Ensemble once played his fiendishly difficult Strathclyde Concerto No 10 at the Southbank Centre, to Max’s great admiration.  We shall all miss him enormously. Today I am going to Westminster Abbey to hear the Commonwealth Observance Day Service and I shall be thinking of him.”

Maxwell Davies last visited The Purcell School in 2015, together with Dr. Anthony Gilbert, as a special guest at Nineteen Thirty-Four, a concert dedicated to the year of their birth.  Prior to that, in January 2013, he gave a composition seminar at Purcell, and three young composers had the chance to work through their pieces with him.  He also spoke to the School orchestra about the inspiration behind his piece Port Lockroy, Antarctica, which they performed in March 2013 at the Southbank.

Former pupil Joshua Hagley commented “Having the chance to play one of my compositions to Sir Peter Maxwell Davies was an unforgettable experience… it was a bit nerve wracking, but he has got such a wealth of experience to draw from and the stories he told and insights he gave were really interesting and inspirational”.