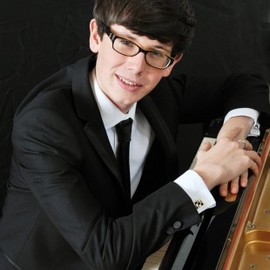 Purcell alumnus, Martin James Bartlett had a busy summer which included two particularly high profile concerts.  On Sunday 9 August, Martin gave his Proms debut, with a performance of Gershwin’s Rhapsody in Blue at the Royal Albert Hall with the Royal Philharmonic Orchestra under the baton of Eric Whitacre.  You can see his performance here.  He also played the Gershwin at Cheltenham Festival, and received critical acclaim for both concerts.

BBC Proms 2015:
“The wit and colour in pianist Martin James Bartlett’s playing was thrilling” – The Times

Cheltenham Festival 2015:
“It was the music that did the talking, with, for my money, the centrepiece being a full bodied performance of Gershwin’s big bellied, nimble footed Rhapsody in Blue, with the fabulously flamboyant 2014 Young Musician of the Year Martin James Bartlett on piano” – The Telegraph

Martin finished his studies at The Purcell School in Summer 2014, shortly after winning the prestigious title of BBC Young Musician 2014.
In this section
Music Departments