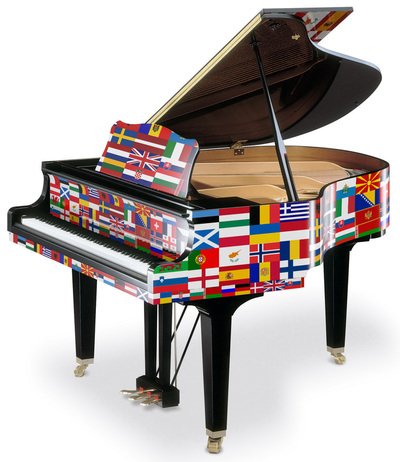 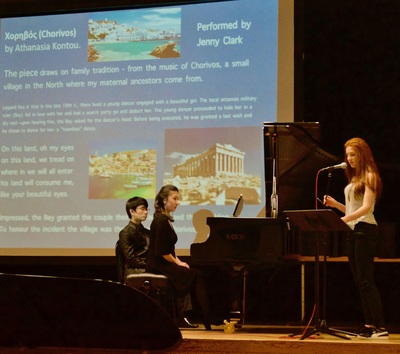 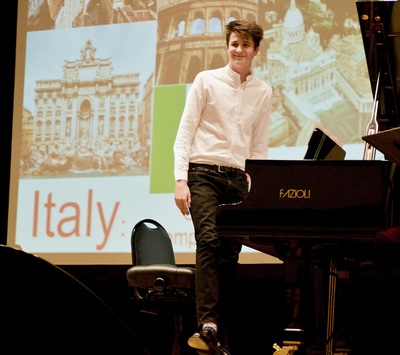 Italy – very appropriately represented on our new Italian Fazioli piano!
On Tuesday 12 January, our pianists performed 28 new piano pieces to a large appreciative audience in a concert entitled ‘A European Pianorama’.  The pieces were written by composers from each of the EU countries, specially created for this event as a special post-examination academic music leadership project in June 2015 by young pianists from The Purcell School, supported by staff members Andrew Williams and Alison Cox.The project has its roots in a similar enterprise run by ​The Commonwealth Resounds as part of the Commonwealth Heads of Government Meeting 2009 in Trinidad and Tobago.  The Commonwealth Pianorama was named as a pun upon the well-known Caribbean steel pan festival ‘Panorama’, and 53 short piano pieces were performed in Trinidad, London and Edinburgh throughout 2009 and 2010.  Due to the success of this original project, the decision was made to put on a European version!

Each pianist was invited to choose two or three EU countries, listen to the traditional and classical music, identify the main composers and musical organisations in each country, and find a young composer to write a short piano piece for them.  The pianists, between them, secured pieces from each of the 28 countries, which is an impressive achievement.  They have also made some new international friends and contacts.

There were a few surprises in the programme, including three eggs being smashed onstage as part of one composition, and unexpected sounds from a piano that had been prepared!  We were delighted to have the following composers present – Felix Altenberg from Belgium, Frederico Paixaio from Portugal, Pol van den Berg from the Netherlands, William Gough from the UK, Vilhelm Patriks Skabardis from Latvia and Ana Meunier from France.

The event will be repeated at the Royal Over Seas League’s Princess Alexandra Hall in June 2016.