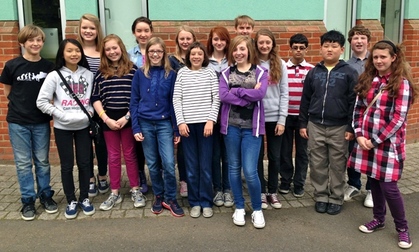 Tomorrow evening the younger members of the school are staging three concerts as part of the Lower School Concert Celebration!

Run annually for the Junior School, Years 7 and 8, the pupils have to work together in their year groups to organise and implement all aspects of a concert and raise funds for a charity of their choice.  The events are adjudicated and prizes for various categories are given to the winning year group.

Year 8 are veterans, having been victorious for the last two years. This year, they have chosen to raise funds for The Starlight Foundation.
Starlight works tirelessly to lift the spirits of seriously and terminally ill children.  Its aim is to provide fun and distraction for children who may be suffering terribly.  It hosts parties and pantomimes, funds Fun Centres, provides holidays and even makes dreams come true!

When the group voted to support Starlight; pupil Evie Rogers liaised with their PR department and the team were off!  Inspired by compassion and fuelled by their various skills, their fundraising efforts have been stunning.  So far they have raised an impressive £1,124.00.   Evie has been the designated fundraiser co-ordinating everyone’s efforts and raising public awareness of the concert and its purpose.  Early on she contacted the Watford Observer who immediately ran an article about the concert, the fundraising and the pupils involved.

Pupil Cyril Vinzent has been instrumental in many aspects of the project, but showing a special gift for enterprise he has set up a website to publicise the project and to receive donations. You might just like to take a look on www.justgiving.com/cyril-vinzent.  Cyril has also organised a successful sponsored run.

Many of the class and their parents have baked fantastic cakes for the ever popular cake sales.  Pupils Francesca Lauri and Heather Brooks organised a series of concerts back home in Surrey – one even attended by Dame Judi Dench!

So far the group has made magnificent efforts but it’s not over yet.  So, if you haven’t already bought your tickets for this event, now is the time.  The concert will take place in the Constance Pilkington Hall on the 27th of June at 8pm.  Hope to see you there!

Click here for full details of the Lower School Celebration and other summer festival events.