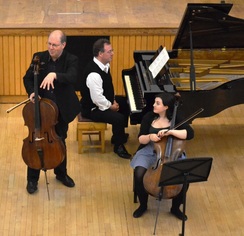 Described once as “Britain’s best kept secret”, Alexander Baillie has become internationally recognised as one of the finest cellists of his generation. He began playing the cello aged twelve inspired by the late Jacqueline du Pré, then studied at London’s Royal College of Music and with André Navarra in Vienna.

He has appeared with many British orchestras and has worked with Sir Simon Rattle, Sir John Eliot Gardiner and has appeared regularly as cello soloist in concertos, recitals and festivals throughout the world. He has given notable first performances of  many works. His version of the Britten Cello Suites achieved the highest acclaim in the New York press.

Alexander features in the film Dvorak… who? about the motivation for young people falling in love with classical music. He is Professor of Cello at the Hochschule für Künste, Bremen, founder member of Gathering of the Clans Cello School and Honorary Doctor of Music at Hertfordshire University. Since autumn 2009, he has been Professor of Cello and Chamber Music at the Guildhall School and he holds the post of International Chair in Cello at Birmingham Conservatoire.

Louise Lansdown was appointed Head of Strings at Birmingham Conservatoire in July 2012, after holding the position of Senior Lecturer in the School of Strings at the Royal Northern College of Music in Manchester from 2001-2012.  She is Director of Chamber Music at Pro Corda.

She holds a B. Mus, B. Mus (Hons) (with distinction in Performance) and M. Mus from the University of Stellenbosch, South Africa. In 1998 Louise was awarded the ABRSM Overseas Scholarship to study at the Royal Northern College of Music. She graduated with a Postgraduate Diploma in Performance in 1999, Master of Music in Performance and Teacher’s Licentiate in 2000, all with Distinction in Performance. In 2000 she was also awarded a Junior Fellowship in Chamber Music at the RNCM. Louise was a member of the Yeomans Quartet at the RNCM from 1998-2001, giving recitals around the UK, Europe and South Africa, as well as recording Haydn and Sullivan quartets. Louise is a member of the Manchester based Pleyel Ensemble, a group that gives Chamber Music Recitals around the North West.

Louise was awarded a PhD from the University of Manchester in 2008 with the title: ‘The Young Paul Hindemith: Life, Works, Relationships, Influences and Musical Activities until 1922.’