The Commonwealth Resounds in Sri Lanka 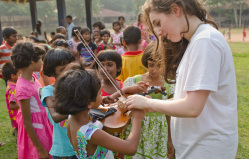 On Monday evening, eight pupils from The Purcell School  returned from Sri Lanka, where they took part in a special music festival that ran alongside the 2013 Commonwealth Heads of Government Meeting.

The young musicians took part in performances, projects, masterclasses, seminars and outreach work for The Commonwealth Resounds!, an organisation seeking to identify and promote outstanding musical initiatives in Commonwealth countries, develop partnerships between artists from different cultural origins and support training programmes for young musicians.  This organisation was founded by Alison Cox OBE, Head of Composition and Outreach at The Purcell School.

On Friday 15th November, three Purcell pupils were invited to perform during a special Royal Dinner for the Commonwealth Heads of Government, hosted by the School’s Royal Patron, The Prince of Wales. They were delighted to have a chance to speak to the Presidents of Nauru and Samoa, who both took a special interest in their musical programme.

Five Purcell School pupils performed in the Commonwealth Festival Orchestra, hosted by the Symphony Orchestra  of Sri Lanka, including many talented musicians from other Commonwealth countries, and conducted by Dr. James Ross. The orchestra gave a spectacular Gala Concert (pictured below left) to a packed audience in the Nelum Pokuna Mahinda Rajapaksa Theatre.  This included Andromeda, a new fanfare composed specially for the occasion by the 16-year old Purcell School composer, Alan Mofti.
The Purcell School’s Sri Lanka team made ‘Songbound’ their special focus for charitable fundraising in 2012/13.  This is a music outreach initiative that uses singing to reach out to India’s most impoverished children via collaborative projects with schools, choirs and professional musicians worldwide. Three new choirs have been started in Sri Lanka as a result of the fundraising achievements of Purcell School pupils, who will be working with Joe Walters and choral trainers in Sri Lanka to spread the benefits of this excellent programme into new communities.