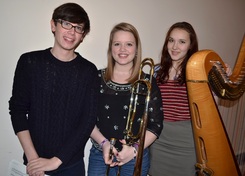 After an extensive audition process, judges have announced five finalists for each of its categories – Strings, Keyboard, Woodwind, Brass and Percussion.  Over 450 entries were received for the contest from musicians aged between 8-18 years old.

Purcell alumnus and flautist, Daniel Shao (18), who took up a place at Oxford in September 2013, has also reached the category finals of the woodwind stage.

The category finals will take place on 3-7 March 2014 in the Dora Stoutzker Hall, Royal Welsh College of Music and Drama, Cardiff.  The semi-final follows on 9 March, before the BBC Young Musician Final on 18 May 2014 at Usher Hall in Edinburgh.  BBC Young Musician will be broadcast extensively on BBC Four and BBC Radio 3.

This year, for the first time, BBC Young Musician have a Jazz Award, comprising two audition stages followed by a Final on 8 March 2014 to be held at the Royal Welsh College of Music and Drama. The Jazz Award finalists will be announced in early February. Four Purcell School  pupils have reached the second audition stage:

Many congratulations to all!