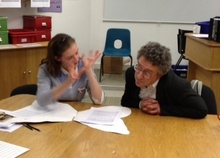 Last week we welcomed eminent British composer Robert Saxton to School to give an inspiring seminar to composition pupils. Currently university Lecturer and Tutorial Fellow at Worcester College, Oxford, his recent works include radio opera, The Wandering Jew, released on NMC in June 2011 and Quartet No. 3 for the Arditti String Quartet commissioned by the South Bank Centre.  Future commissions include an organ work for sound festival in Aberdeen and a song cycle for the Oxford Lieder Festival in 2012.

On the same day, the magnificence and splendour of no less than 20 trombones could be heard resounding throughout the School, when the Royal College of Music Trombone Ensemble came in to give a workshop to our pupils followed by a fantastic concert.
In this section
Music Departments