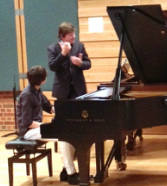 Professor at the Moscow Conservatory, Petukhov is in much demand as a soloist, teacher and adjudicator.  He studied at the Moscow Conservatory with Tatiana Nikolayeva and during his time there, he met and was influenced by Dmitri Shostakovitch, Sviatoslav Richter and Emile Gilels.  After winning the 7th International Queen Elizabeth Competition in Brussels (1975), Petukhov received numerous invitations from Europe, Japan, and the U.S. However, the political situation in the Soviet Union prevented him from travelling internationally until 1988. Since then, he has performed to great acclaim throughout in Europe, Asia, South America, and North America.
In this section
Music Departments