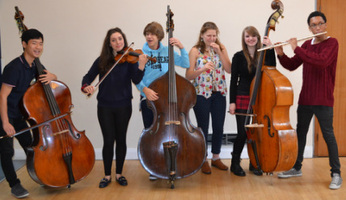 Pupils in Year 11 were celebrating success in their GCSEs today. Every pupil gained at least 5 A*-C grades, with Hana Mizuta-Spencer securing seven A*s and one A, while Jenny Clarke scored five A*s and three As. Overall, a quarter of grades were A*s, nearly two-thirds were A* or A, and 86% were A*, A or B, the highest for seven years.

Headmaster David Thomas commented: “I am delighted to see how well our GCSE candidates have performed. Their successes are even more impressive when you remember that they have achieved this alongside a very demanding programme of music practice, competitions and concerts. Indeed, many of them were playing at the Wigmore Hall in the middle of their exams! I am very pleased that their hard work, and that of their teachers, has been rewarded.”

Last week, A-level students received their results, with every pupil securing their place at music college or university; Christopher Bowman and Sophie Sparkes both achieved A*AA, and Sophie will take up her place at St Anne’s College, Oxford, in October.