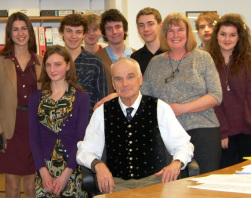 Sir Peter Maxwell Davies, Master of the Queen’s Music, visited The Purcell School on Thursday 10th January.  He discussed his role as Master of the Queen’s Music with young composers and performers aged between 15 and 18 and gave a composition seminar, where three young composers had the chance to work through their pieces with him.  He also spoke to the school orchestra about the inspiration behind his piece Port Lockroy, Antarctica, which they will be performing in March at the Southbank.

One of the foremost composers of our time, Sir Peter Maxwell Davies has made a significant contribution to musical history through his wide-ranging and prolific output.

Sixth Form pupil Joshua Hagley commented “Having the chance to play one of my compositions to Sir Peter Maxwell Davies was an unforgettable experience… it was a bit nerve wracking, but he has got such a wealth of experience to draw from and the stories he told and insights he gave were really interesting and inspirational”.

Sir Peter Maxwell Davies commented “It was an absolute pleasure working with pupils from The Purcell School. The young people I had the opportunity to speak to were clearly passionate and focussed in their musical endeavours. I hope to visit the School again before attending the concert in March at which the orchestra will be performing my piece”.

The Purcell School Orchestra will be performing on Monday 11 March, 7:30pm at the Southbank Centre’s Queen Elizabeth Hall.  Tickets are priced at £12; £7; Concessions: 50% off (limited availability) and available from the Southbank Box Office:  0844 847 9910 / www.southbankcentre.co.uk.

Sir Peter Maxwell Davies will be attending the concert as guest of honour.