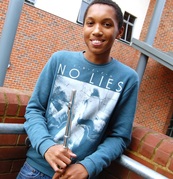 Purcell pupil, Matthew Higham (Y10), has won the Laura Marco Prize for 2012.  This prize has been awarded annually, since January 1984 in connection with the ABRSM examinations in music in the preceding year, and is offered to the candidate gaining the highest marks, not less than 135 or at the Board’s discretion, in Grade 8 Flute.

The prize was made possible by the generosity of the friends of the late Laura Marco, a young doctor who took up the flute after leaving medical school.
In this section
Music Departments